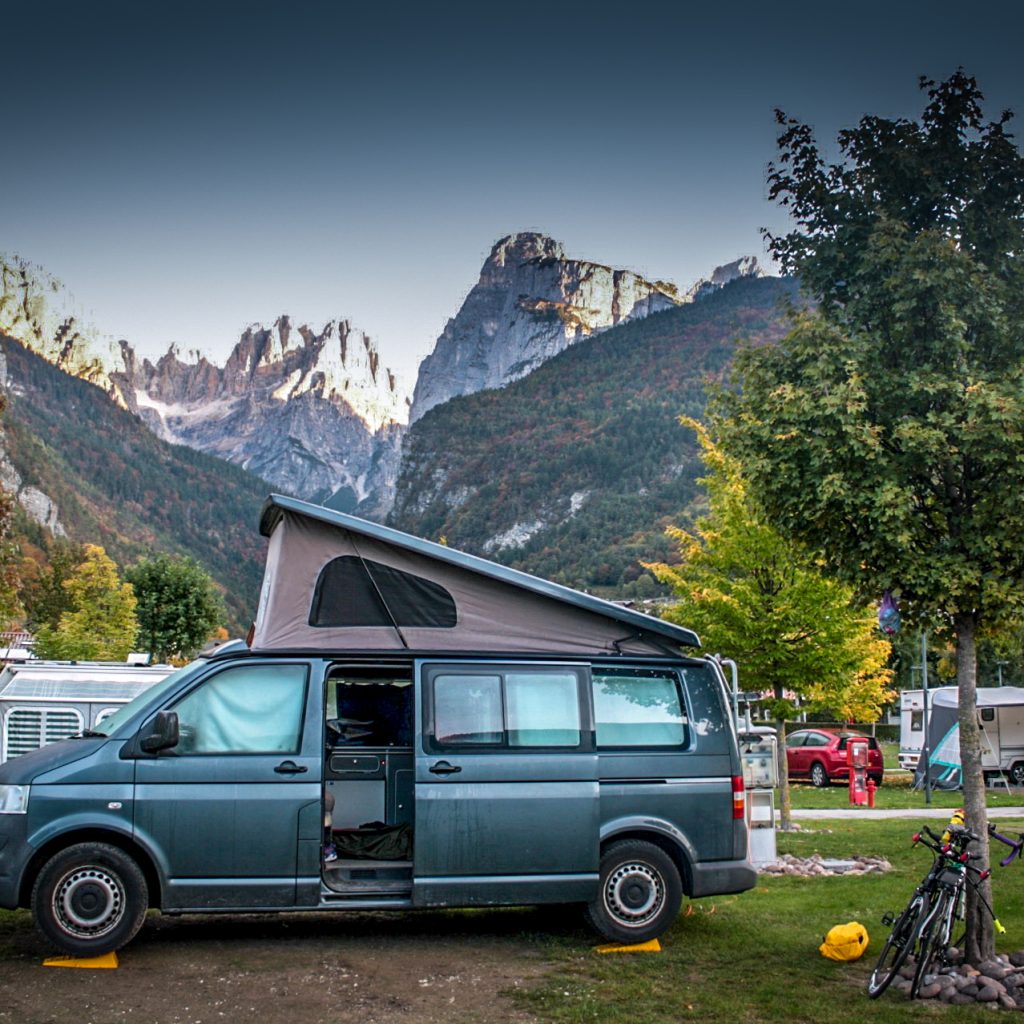 Triathlon is a complicated, equipment intensive sport that is both physically and mentally challenging. All of this explains why I love it. Most people mistakenly think it’s three sports; swimming, cycling and running.

It’s not, it’s only one.  Because to those three obvious elements, you have to add T1 (T=trainsiton), the speed at which you get out of your wetsuit and onto your bike, plus T2, the transition from cycling to running.  The transition is frequently called “the fourth discipline”.  However, to these, I’d add a fifth element – preparation – because the days leading up to the event can make or break race success.

That is where Nellie is my big, grey, not so secret weapon.  She’s our long wheelbase Jerba Campervan, and I’m telling a few tales of how she has become an integral part of the various adventure sports that feature in our lives.

The first Ironman branded event on the UK calendar is a half-distance race in Staffordshire.  Half-distance if also known as 70.3 and involves swimming 1.2 miles, cycling 56 miles, then running 13 miles of a half-marathon, all of which is exactly half the distance of a full Ironman event.  Staffordshire is not an area I know, so I travelled south in Nellie a few days early.  Together we covered the entire bike route, so I had to get a feel for which sections were fast and which required a lot of concentration, then I parked her and cycled those tricky sections.  We camped in a field with basic facilities, and with two days to go, I felt I knew as much as anyone could about what lay ahead.

Possibly more stressful than race day itself is the day before because that’s when every piece of equipment has to be put in its right place.  Get this wrong and you’ll have a bad race.  You have to travel to the event centre, park, register, and collect all the stickers, race numbers and bags which that are the accoutrements of triathlon.  Bike kit goes in one bag, running kit in the other.  The running kit hangs on a rack at the second transition T2 which, awkwardly, is not in the same place as the first transition because the Staffordshire bike course is not circular.  This is what’s called a “split transition”.  So you have to transport your bike and bike-kit bag to T1, some thirty miles away, where you’ll be swimming first thing in the morning, then go back to eat, rest and sleep.  Does that sound confusing?  Good, because it is.

This is where Nellie comes into her own.  Everything I could possibly need is inside.  Track pump, puncture repair, spare wheels – in fact, a whole spare bike!  While folk dash around until late in the evening of the pre-race day, Nellie and I relax in the campsite next to the race village.  Come early morning, when other racers were driving to the event at 3:30am to catch the 4:30am shuttle-bus to the swim start, Nellie and I were already there.  I enjoyed a good night’s sleep her familiar, comfortable bed and departed with breakfast and a hot cup of coffee in hand.

Obviously, the detail of each triathlon is different, but the benefits of racing from my own comfortable van, a true mobile home, cannot be over-stated.  She has taken me around Scotland to races on Aran, Loch Lomond and Aberfeldy, and further afield to Pula in Croatia and, for a full Ironman, to Maastricht in the Netherlands.  Each time I’ve arrived at the start line more relaxed and in better condition than if I’d travelled in a car and stayed in a hotel.  Mind you, what happened after the starting hooter sounded… well, that’s another story.

Our Jerba Elevating Roof is strong enough to carry up to 100kg, perfect for carrying lots of equipment in roof boxes. We can fit any of our T6 campervans that have a tailgate (Cromarty, Tiree, Sanna and Taransay) with a VW T6 tailgate bike rack that can hold four bikes. We choose to fit the VW bike rack as we simply believe it is the best on the market. Our J-pod conversion also makes carrying and storing expensive bikes inside your van easier.