Home » The Thorpe’s Road Trip To The South of France

The Thorpe’s Road Trip To The South of France 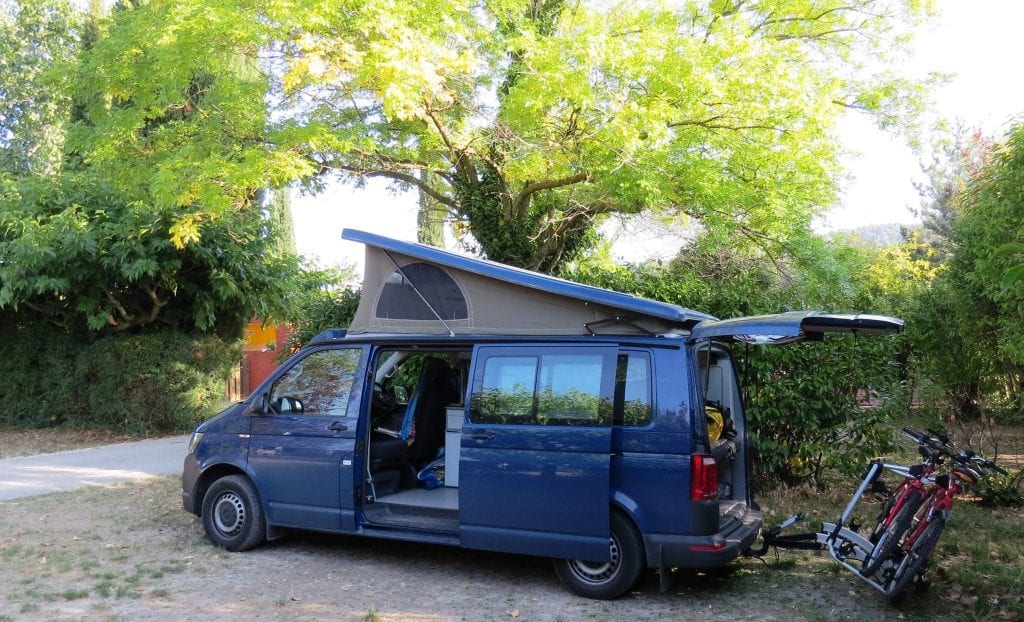 In this blog article Ian & Elizabeth Thorpe tell us about their road trip to the south of France in their LWB Comarty.

We started our trip to France with an overnight stay in Kent, to give us the chance of an early ferry crossing from Dover the following morning. Not for the first time, we found that by September quite a few campsites on both sides of the Channel have closed for the season, often in contradiction of the information provided on their website. We tend not to like the larger sites particularly, but do appreciate a clean and well equipped toilet and shower block.

Our first aim in France was to visit Chartres. We intended to skirt the busy roads of Paris, and were somewhat surprised to find ourselves (following our satnav towards an eco-campsite at Rambouillet) in a tunnel motorway (the A86) which offers 2m of headroom. I have the dimensions of our camper on a sticker on the windscreen as a reminder, so I knew that we would be fine, but it was impossible to drive at motorway speeds without ducking as we passed the signs hanging from the ceiling of the tunnel. Not a very comfortable thirty minutes or so. However, not for the first time we were glad that we had treated ourselves to a motorway transponder which works throughout France and avoids the inconvenience of paying the toll at the booth. Instead your bank account is debited at the end of the month, with a detailed list of all your motorway trips emailed to you (www.saneftolling.co.uk).

I was last in Chartres about 40 years ago, and Elizabeth had never been. Shortly after graduating, I had seen the cathedral in its dark Gothic hues, the stone black from centuries of candle smoke. I couldn’t then afford a guided tour, but this time we had the delight of spending a couple of hours with Malcolm Miller, who has spent a lifetime learning everything there is to know about the cathedral, and passing much of it on in his tours.

Chartres Cathedral from the cathedral close

He showed us round the newly cleaned, cream-coloured interior and explained how to read a stained-glass window. And what glass Chartres has – the largest and best collection of medieval glass anywhere in the world.

One of Chartres’ unforgettable rose windows

The centre of the rose window

Heading south we overnighted at a pleasant municipal site in Olivet, south of Orleans. How well the French manage their municipal sites – attractive pitches, good facilities and within easy walking or cycling reach of the town’s facilities. This was our first trip with our bikes and we enjoyed the fact that our towbar carrier (an Atera Strada from www.roofbox.co.uk) allows us to slide the bikes back (if we don’t want to unload them) to access the great storage space in the back of the van. As always, we appreciated the speed and ease of raising the Jerba roof, swizzing the front seats round and pulling a beer from the fridge. For September, it was quite a warm evening; we were steadily moving south.

We were now in a part of France that we don’t know at all well, enjoying our gentle wandering through the Massif Central and delighted to discover Le Puy en Velay as a base for three days. Again, a marvellous municipal site managed by a delightful young couple, offering fresh baguettes and pains au chocolat at the office each morning. Here we explored the town and its restaurants, the surrounding countryside with an attractive riverside cycle ride, and the historic Saint-Michel d’Aiguilhe chapel which was built in 969 on a volcanic plug 85 metres high. The chapel is reached via 268 steps carved into the rock. Phew!

The Cathedral cloister in Le Puy

Our next destination was Tain l’Hermitage, where we camped in another municipal campsite this time spectacularly situated on the east bank of the Rhone. Unlike almost all the other sites we visited, this one was busy, and was turning people away from about 5pm. It was also unusual in providing plenty of mosquitoes which we beat off with our midgeproof screens. From the Massif Central to the Rhone was a good drive with lots of bends: we were grateful for our reliable brakes.

The following morning I had a little cycle around Tain and then we drove, via buying some excellent wine at the Cave de Tain, along a very pleasant country route to camping Le Voconce near Crestet, an ancient and very beautiful village. This is a simple but perfectly adequate country site with a bar and café where we had our evening meal and a couple of beers.

Crestet’s streets were designed for donkeys, not cars

The medieval village of Crestet

Now that we were in wine country we adopted a practice of buying 6 or 12 bottles at many of the domaines we visited, grateful for the fact that the Wallas stove/heater option we had chosen leaves us with usable storage space which would otherwise be taken up with gas bottles and a heating unit. Take your pick!

From Tain l’Hermitage our route took us to Les Baux en Provence, where we had arranged to spend a few days with friends who moved to France many years ago. However much we love our camper, it is very pleasant to have a luxurious shower and sleep again in a soft bed. We find the camper bed fine but firm – pleasingly wider than those we have had in earlier VW conversions and remarkable for providing in day-mode three full width fully belted seats – vital when we or our children are transporting a trio of grandchildren.

When we said goodbye to our friends for the drive home we picked up fuel in St Remy – the first refill since Orleans almost 600 miles earlier. We are amazed by the 150PS/6-speed gearbox combination which gives similar driving ease and economy to a Golf estate we had some years ago. We drove up towards Condrieu but for most of the time were on the east bank of the Rhone. We camped that night near St Clair sur Rhone.

For another day we chose not to pay tolls in order to find a more scenic route. Much lovely countryside today, including the river Aube and village of Auberive. White Charolais cattle and white free-range hens (thousands of them) were much in evidence. Once again our target campsite (in Chaumont) had closed early and we had an interesting diversion to a basic country site near Roches Bettaincourt, Camping l’Orchidee Home. No phone signal or wifi, but probably our favourite site of the whole trip. We were the only people there, so had its fields and lake to ourselves.

The next day we decided to use motorways for speed and had our transponder dinging every couple of hours. Easier driving, just needing to keep awake! We had a shopping break in Chalons (sur Marne when I was last there, now en Champagne) and a lunch break by the motorway. We were aiming for the municipal campsite in Clairmarais but found a slightly nearer one at Arques, camping municipale Beausejour. Like a couple of other sites we’ve seen, it offers a camping car parking area at a much cheaper rate without facilities.  We chose the campsite and had very modern facilities and again the opportunity to order morning bread and pains au chocolat, this time delivered to our pitch from the local boulangerie. What a civilised country! We had a sunny teatime (the first rain since the last time we were in the north had fallen that afternoon).

All too soon we were on the ferry from Calais and negotiating the M25 and M6 on our way home. It had been a great trip, and we’re still drinking the wine. The campervan had distinguished itself in every way. We’ll be back before long.