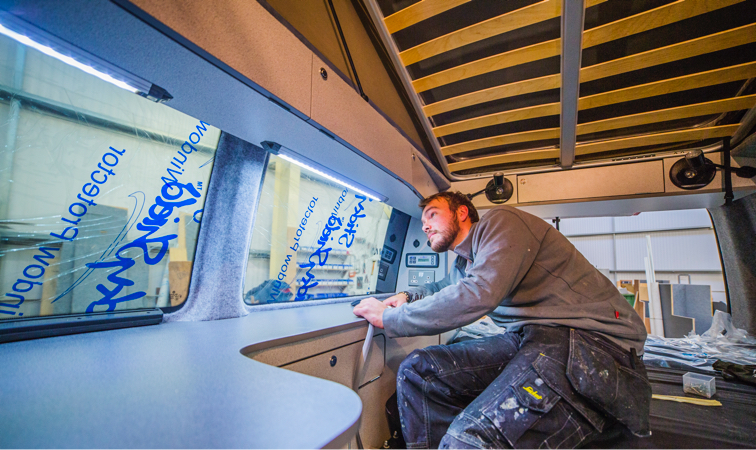 Run by People Who Actually Use a Campervan!

After ten years of owning and hiring campervans in countries around the world we’d always felt that we could improve on the design of the vans we’ve had. Sometimes we wondered if the people who did the designs had ever spent a day or night in a campervan!

We knew we could do better, so in late 2005 we took the step and Jerba Campervans was formed. Although we started by converting any van we now specialise in the VW Transporter T6.1 and are proud to work directly with officially with Volkswagen as a registered vehicle body builder for their Transporter T6.1 into a VW T6.1 camper. We also hire out three of our designs which allow customers to try out the campervan experience before committing to buy – it allows us to try out new products, fixtures and fittings before offering them as part of our conversion options.

We bought our first campervan, a VW T2, in Canada in the mid 1990’s, we lived out of it for two months and drove it from Vancouver to Montreal, it was before we had children so we know what it’s like to live as a couple in a van. We now have three children, all born between 1997 and 2001, and in 2000 we took a four month campervan rental trip to both New Zealand and Australia. It’s a different challenge with young kids than being on your own, and we soon learnt what’s important in the layout and design.

In the UK we owned a T4 VW campervan conversion from 2002 to 2005 and used it as both a holiday vehicle as well as our everyday transport. In 2005 we decided to upgrade to the new VW T5 and after months of painstaking research bought a base window van vehicle and undertook the conversion to the layout that we knew best suited our family and our needs. With practical experience and a real passion for adventure and the outdoors, our aim has been to bring new and practical ideas to the UK campervan market.

Renting a small business unit in North Berwick in 2006, that was just large enough in which to fit two vans, we began to build the company with the goal of creating a leading brand that was aimed at the high quality end of the UK VW campervan market.

In October 2012 the company gained full European Type Approval certification for all its campervan layouts, it was the first UK VW campervan company to secure this certification and to prove that its campervans were fully safe to drive on the roads. 2012 was also the year that Jerba became a registered campervan body builder converter for Volkswagen Commercial Vehicles – a much sought after status that is still only held in 2020 by a total of nine UK campervan conversion companies.

In 2015 a patent was gained for a unique pop top roof design and we began fitting it to all our own conversions. It has become a key feature of every campervan the company builds and is a key attraction for many customers. In 2018 the company joined the National Caravan Council (NCC) and we gained full certification approval for all our campervan designs – NCC Approval covers all aspects of living safely in a mobile home.

In 2017, as we both passed our 50th birthdays, we began to think about the future of the business and in January 2018, after detailed planning and research, formed the Jerba Campervans Trust, into which we transferred 100% of the issued company shares. Jerba Campervans became 100% employee owned.